"The Pierced Heart and The Machete" 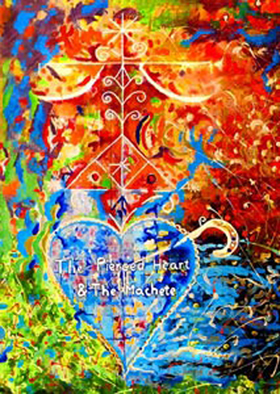 In the past, I have definitely preferred Sublime Frequencies' musical releases to their cinematic ones, but Olivia Wyatt's follow-up to Staring into the Sun is quite a beguiling exception to that trend.  Naturally, one major reason that this film is so great is the exotic and fascinating subject matter (Vodou pilgrimages in Haiti).  However, Wyatt's skillful execution elevates her footage into something truly wonderful, lushly and kinetically capturing the unique and occasionally disturbing sights and sounds of a world that very few non-Haitians will ever to experience first-hand.

Blending psychedelia, occultism and a YouTube sense of filmmaking, Shazzula’s Black Mass Rising is an arduous yet rewarding trip through the borderlands of the mind. With no dialogue and no plot, she shows us a procession of vaguely related tableaus all presented with one of the best soundtracks I have heard in years (featuring pretty much every band I would consider essential when it came to doing a soundtrack for a film called Black Mass Rising).

Jack Rose & Glenn Jones, "The Things That We Used To Do"

Collecting two albums worth of in-studio performances, six live songs split between Jack Rose and Glenn Jones, a pair of duets, and one superb interview, The Things That We Used To Do is an exceptional and insightful document into the talents and personalities of both guitarists. Professionally filmed, recorded, and mastered, it's like the ultimate bootleg for fans and admirers, providing excellent sound and video of two masters at work, as well as copious amounts of information about their backgrounds, their experiences with legends like John Fahey and Robbie Basho, song-writing, and something Jack liked to call "pussy chords."

About five years after first announcing it, Peter Christopherson has finally completed the monolithic tombstone for Coil in the form of this lavish 16 DVD box set. Compiling videos of live performances from 1983 up until their final performance in 2004, Colour Sound Oblivion charts the evolution of a sensational group through one of their most fecund periods. Coil seemed to be on a consistently upward spiral in the time period covered by this collection, John Balance's artistic vision becoming stronger and more compelling when connecting with an audience. Despite some ropey moments either in terms of sound quality or the certainly not HD video, Colour Sound Oblivion exceeds all expectations and is as remarkable as could be ever hoped for.

"Live at The Smell" DVD

This ten-band concert DVD celebrates the weird, sweaty entropy of LA’s unique all-ages DIY club.  There are some fairly well known bands included here, such as High Places and the reliably excellent No Age, but the most memorable performances are generally delivered by those that lurk in the most aggressively uncommercial shadows of the lunatic fringe (like Captain Ahab and Foot Village).
Continue reading
Tweet
12136 Hits

Taking a moment to not release yet another album, this retrospective DVD features videos for some of the band's studio cuts, live footage from across their career and behind the scenes vignettes. There is three hours of great music included here and hardly a dull moment. The videos are a treat for the eyes and while the live footage is no Bon Jovi spectacular, it fully captures the energy and excitement of the group's live performances. The whole package is a great way to get re-acquainted with a concise but frequently brilliant body of work.
Continue reading
Tweet
13487 Hits

This documentary is a fascinating glimpse into the life, works and working methods of the late, great composer. The footage is all taken from the period prior to Ferrari’s death but despite a lack of archival video footage, this film is full of fantastic insights and sounds from all across his career. Due to Ferrari being such a fun subject, the film is as entertaining as it is spellbinding.
Continue reading
Tweet
12448 Hits

Considering music videos seem to be only broadcast on YouTube, I wonder why bands go through the bother and expense of making them when they could be producing more music. Granted there are those times when picture and sound come together to make something powerful but this certainly is not one of those times. A crappy homage to the gorier side of '70s and '80s horror movies and a bunch of ropey live footage was never a good idea, how it got as far as being pressed on DVD is beyond me.
Continue reading
Tweet
12435 Hits

Following the release of their (so far) only album Chaos Is My Name a couple of years ago, this trio consisting of Khanate’s James Plotkin and Tim Wyskida and Thorr’s Hammer’s Runhild Gammelsæter played exactly one gig and seemed to have left it at that. Luckily the show was recorded on a couple of cameras and has made its way onto this DVD. As great as the album was, the video presented here shows that the studio fails to capture the full intensity of the group’s performance.
Continue reading
Tweet
13024 Hits

This compilation of Negativland's video work over the past two decades fits right in with the YouTube Poop generation: plunderphonic video cut-ups sourced from mass media are spliced together into prankish, mindbending collages that shock, confuse and annoy in equal measure. The main difference between this material and the video lulz currently polluting the Internet is that Negativland use these techniques to touch on issues of spectatorship, copyright law and American cultural imperialism.
Continue reading
Tweet
28327 Hits

Nobody will ever be able to accuse Pan Sonic of holding back from their fans. The duo has always been quite generous: issuing albums which are double the length of the average full-length, with the exception of Kesto, a -four- disc set of all new material priced reasonably; releasing numerous albums in various configurations, either solo or with others; and even opening the floor out to their fans for offers of places to perform. This, their first official DVD release is quite a present for the fans, however, it's not a monumental accomplishment in their catalog for the more pedestrian consumer.
Continue reading
Tweet
17053 Hits

Mono, "The Sky Remains the Same as Ever"

Having enjoyed Mono's last couple of records and their subsequent live dates, I was eager to check out this DVD that documents their tour and time in the studio. Unfortunately, the documentary reveals little new information and struggles with distilling the essence of the band.
Continue reading
Tweet
13935 Hits

This is one of two editions released at the same time of Victor Sjöström's silent masterpiece from 1921. In lieu of the usual silent movie soundtrack (an example of which is on the other edition), Stephen O'Malley and Peter Rehberg score a violent and unsettling accompaniment to the proceedings. The film is worth watching in any case but the powerful atmospheres conjured up by this pair makes for an uncomfortable and rewarding night in.
Continue reading
Tweet
17711 Hits

This DVD formally introduces the animations and video work of Lightning Bolt's Brian Gibson. I had high hopes for Barkely's Barnyard Critters immediately comparing it to Brian Chippendale's renowned visual output, but aside from one video short, was sadly let down.

This 2xCD+2xDVD collection easily rivals the This Heat box as my fave boxed collection of vault material released this year. It is a perfect companion to any Fad Gadget/Frank Tovey fan's collection as it has very little overlap with in-print releases and compilations. More importantly, it also serves as an audio and visual testament to the man whose late '70s/early '80s combination of electronics and violence in a pop setting was unparallelled, beyond its time, uncompromising, hazardous, and directly or indirectly influenced nearly every one of the most popular electronic acts of the last quarter century.
Continue reading
Tweet
17588 Hits

New York’s No Wave scene of the late ‘70s was a brief but visionary moment in music history centering around bands whose members were frequently non-musicians but came from a variety of artistic backgrounds. While this documentary is by no means a definitive statement, it certainly sheds some light on what the movement was all about and what it meant to many of those involved, and how their pioneering spirit may or may not live on in the music of the generations who followed.
Continue reading
Tweet
14978 Hits

Made in 1986 by two aspiring documentary filmmakers from Baltimore, Heavy Metal Parking Lot has since become an underground cult phenomenon and probably one of the widest seen documentary short-subjects ever produced.  This DVD release is the first for HMPL, pulling the film out of the underground bootleg VHS tape-trading culture in which it has thrived for two decades by word-of-mouth alone, and into the mainstream, adding commentary, outtakes and hours of nifty bonus features.
Continue reading
Tweet
29065 Hits

The last time we covered a Jandek DVD on The Brain, it was Chad Friedrichs' 2003 documentary film Jandek on Corwood, a series of talking heads speculating about the music and the mythos, Jandek himself a no-show apart from a disembodied telephone voice recorded in 1985.  A lot can change in three years, and this month brings the first official Jandek DVD released on Corwood Industries, a DV recording of Jandek's first-ever live performance at the Instal festival in Scotland in October 2004.  Even if you've heard the widely distributed bootlegs, or Corwood's official CD release of the show, the Glasgow Sunday DVD still provides a shock to the system.
Continue reading
Tweet
15401 Hits

This is the absolute best video biography of the only relevant period of Factory Records (1978-1981), featuring interviews with Tony Wilson, Peter Saville, Peter Hook, Chris Watson, and members of Durutti Column, Section 25, A Certain Ratio, The Names, and many more.  Unfortunately, compared to what the public has to go on, that's not saying much.
Continue reading
Tweet
15434 Hits
First Page Previous Page 1 2 3 4 Next Page Last Page