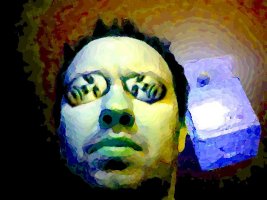 Mostly known as producer/programmer
Co-produced/programmed a few Coil things, all the Coil/Nine Inch nails remixes
Pioneer of timestretching drums, voices etc (as heard on LSD, NIN-1990+1994) - Now heard on every dance track circa 2002.

In semi-retirement since 1998 due to protracted grief with publishing company re: monies owed. At the moment (April, 2002) doing some little things once again with Coil, starting to get reinvigorated.