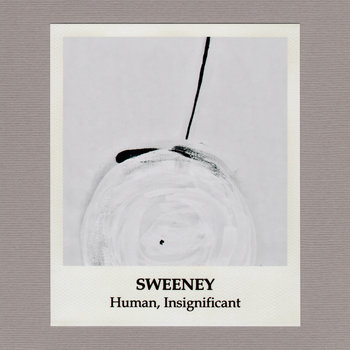 Sound In Silence is happy to announce the return of Sweeney, presenting his second album Human, Insignificant.

For about twenty years Jason Sweeney, now based in Eden Hills, South Australia, has been composing and recording either solo, under the alias of Panoptique Electrical, Other People’s Children and Simpático, or with friends in various musical projects like Pretty Boy Crossover, Sweet William, School of Two, Luxury Gap, Par Avion, Great Panoptique Winter, Mist & Sea, Winter Witches, GIRL and many others. He has also been directing and creating interactive works for the internet, experimental films, projects for galleries and theatre spaces and has collaborated with some of Australia’s leading performing arts companies and organizations.

Human, Insignificant is a wonderful collection of eight new emotional songs about brokenness and fragility. With a total duration of something more than 26 minutes, it’s a brief, quiet and melancholy album, written, recorded and produced by Sweeney with the help of his collaborators Zoë Barry and Jed Palmer who played and recorded cellos respectively. Centered on Sweeney’s fragile vocals and elegant piano melodies with the addition of string arrangements of cinematic cellos and layers of other odd sound artefacts and noises, Human, Insignificant perfectly merges songwriting, modern classical, evocative atmospheres and ambient soundscapes.
Human, Insignificant is a breathtaking album with a feeling of meditation, highly recommended for devotees of Scott Walker, David Sylvian and Anohni.