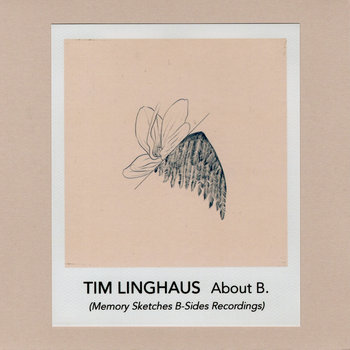 Sound In Silence is happy to announce the addition of Tim Linghaus to its roster of artists, presenting his new album entitled About B. (Memory Sketches B-Sides Recordings).

Tim Linghaus is a musician and composer based in Cuxhaven, Germany, who creates his compositions blurring the lines between modern classical and ambient soundscapes. Since 2016 he has released an EP in 2016 on Moderna Records and an album in 2018 on Schole and 1631 Recordings.

About B. (Memory Sketches B-Sides Recordings) is a wonderful collection of thirteen new unreleased tracks in conjunction with four reworked versions of tracks from his highly acclaimed debut album which was released last year. It is in line with his debut album as all tracks were recorded around the period of the Memory Sketches sessions, trying to preserve particular personal memories in form of music. The album’s instrumentation is centered on wistful piano lines, warm synth arpeggios and layers of swirling drones, enhanced by cello, violin and saxophone performances by Sebastian Selke of CEEYS, Jean-Marie Bø and Tobias Leon Haecker, while field recordings and other sounds, like vinyl crackles and subtle electronics, perfectly fill the background atmospherics.
Mastered by George Mastrokostas (aka Absent Without Leave), giving an intimate warmth to its sounds, About B. (Memory Sketches B-Sides Recordings) is an album full of gorgeous textures and stunning atmospheres, highly recommended for fans of Nils Frahm, Ólafur Arnalds and Max Richter.

Starting in 2004, the trio of Pit er Pat—Rob Doran, Fay Davis-Jeffers and Butchy Fuego—have been releasing music on a number of different labels, including their latest full-length on Chicago's Thrill Jockey. Their brand of music has drawn comparisons to Blonde Redhead, Soft Machine and Slapp Happy, among others.