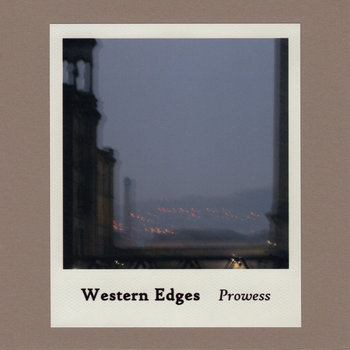 Sound In Silence is proud to welcome Western Edges to its family, presenting his debut album Prowess.

Western Edges is the new ambient/electronic solo project of Richard Adams, founder member, alongside his brother Chris, of the legendary Leeds band Hood. Since Hood went on hiatus in 2005, Richard Adams has recorded his music under the moniker of The Declining Winter, either solo or with help of friends such as Martin Cummings (Northerner), Paul Elam (Fieldhead), Mick Harrison (Prolapse, National Screen Service), James Yates (Seamajestea), Barrie Cummings, Joanne Ellis and many others, having released several sublime albums, EPs and singles on labels such as Home Assembly Music, Rusted Rail, Monopsone, Mobeer and Rural Colours, amongst others. He is also member of several other projects such as Memory Drawings, Great Panoptique Winter and Northern Exchange, along with friends such as Joel Hanson (Judgement Of Paris), Sarah Kemp (Brave Timbers, Last Harbour), Gareth S Brown (Hood), Chris Cole (Manyfingers, Movietone), Jason Sweeney (Panoptique Electrical) and others.

Prowess is Adams’ third release on Sound In Silence after two highly acclaimed albums in 2015, Wildness by Great Panoptique Winter and Endless Scenery by The Declining Winter.

Prowess is made up of eight electronic tracks, of blissful ambience and shimmering electronics. These tracks were made to soundtrack the feelings Richard Adams had about the area where he lives in Saltaire, West Yorkshire and the Aire valley, while each one was inspired by a different photograph of the area. Adams skillfully blends together elements of soothing ambient, lo-fi electronica and minimal techno, creating an impressive album full of warm soundscapes, ethereal textures, washes of lush pads, drifting synth layers, hypnotic drones, deep bass lines and minimal beats.
Expertly mastered by George Mastrokostas (aka Absent Without Leave), Prowess is a delicate album which appeals to all fans of beatless Boards Of Canada, Aphex Twin, bvdub and late-period Hood.

Greg Davis, Ben Vida, and Keith Fullerton Whitman each have new albums on Kranky and are on the road, touring and playing together as a trio for the first time. While we settled on the name of this Eye segment as "Nightcrawlers," rejected titles included "Menage a' Beard," "Friends That Play Together Stay Together," and "Banjovi." Hopefully we can look forward to an amazing album from the three eventually.