Michael Pisaro: A Conspiracy Against the Ordinary

Experimental music opens up our ears. Should we become too rigid or inflexible in our thinking, sound can point us toward broader avenues and unexpected possibilities. This, says Michael Pisaro, is one way that experimental music reaches out into the world. But, he says, it doesn't just reach out, it invites listeners in and asks them to interact with what they hear. Over the course of several emails, I talked with Michael about his sense of time in music, complexity in modern composition, why silence matters as musical material, and how sound is never exactly what it seems.

I first read about Michael Pisaro's music in a review by Bill Meyer, which contained a link to several of Michael's essays about experimental music. One in particular, titled Hit or Miss, draws connections between modern music, baseball, and the feelings aroused by listening to The Temptations. Reading that and hearing just a brief sample or two of his music was enough. The next day I eagerly grabbed a copy of 2 Seconds/B Minor/Wave, and a couple weeks after that, I was ordering more.

Michael is a composer, guitarist, long-time member of the Wandelweiser Group (Michael's essay on Wandelweiser at Erstwords is a must-read), and a professor at the California Institute of the Arts. He's also the head of Gravity Wave, the label on which many of his most recent recordings have appeared. His music is impossibly difficult to describe in a summary way, in part because his work is so varied, and referring to Michael's avowed influences, like John Cage or Christian Wolff, does little to alleviate that problem. He's produced everything from pieces for classical instruments like violin, oboe, and trumpet to the Transparent City series, which is made up of sine tones and field recordings. A Wave and Waves, released by Cathnor in 2009, is scored for 100 percussion instruments.

After listening to some of the newer releases on his label and reading more of his essays, I contacted Michael with a few questions. Many of them arose from reactions I had to his essays (two of which had been written over a decade ago) and others were about how his theory applied to his practice. How could a composer so concerned with silence write and record an album as full-bodied as ‚ÄòHearing Metal (2)?' And how is it that silence increases the complexity of a piece of music rather than the opposite? In his responses, Michael talks about everything from John Cage to filmmakers Allan Sekula and No√´l Burch, Bob Dylan, and philosopher Alain Badiou.

Reading Michael's essays will provide some context for the following conversation, but doing so isn't required. I quote from the essays in several of the questions and Michael talks fluently and easily about the topics we cover.

Lucas Schleicher: I'd like to start with some introductory information. Who are you, where are you living, and how would you describe what you do?

Michael Pisaro: I'm a 50 year-old (white) guy living near Los Angeles, and teaching at the California Institute of the Arts, which is mostly how I make my living. I think it is still fair to call what I do "experimental music" although I readily admit that term has broadened to the point where it might nearly be meaningless. I write and play music.

LS: In 1997, you summarized your manner of working in the following way: "Normally when I start to write, I begin by selecting a single sound. My aim is to make this single sound become the piece, or rather, the piece is about the ‚Äòbecoming' of this sound. This emphasis on one sound has several ramifications, which show up as preferences for the solo player, one instrument, one event, one silence, etc."

Is this description still accurate? What do you mean by "the becoming" of a sound?

MP: Another word for becoming might be unfolding. To unfold a sound means to extend it in a way that (hopefully) reveals its potential. My belief is that "a sound" is never one thing, but something like a crystalline structure with facets, reflections and directions already imbedded in it. An unfolding might thus be likened to breaking it down into its chemical components, and then possibly combining them in new ways. I don't think there is anything particularly new in this. It would also be a good description of the way Ockeghem or Bach worked.

Looked at in another way, however, the becoming of a sound might take place all on its own. That is, a sound or a location or a group of sounds, apparently static, can, through the mysteries of duration, establish itself without any other addition, or with just the slightest push from the musician. I'm thinking about a piece from Taku Sugimoto's record Doremilogy (the first one, called 1.1) where a C is held on an e-bow guitar for a very long time (maybe 15 minutes) before heading relatively quickly up the rest of the C major scale. It's a very odd and beautiful piece. But this tone, just apparently sitting there, starts to do something. Exactly what it is doing is hard to say, but it does have the sense of being on its way, of moving, even though in traditional terms it is always stable.

I think right now it is both of these ways of thinking that form part of the background to what I'm doing.

LS: Bach might have worked in a similar way, but not, I'd guess, in the same way you do. Many of your pieces, like the Sugimoto one you mention, develop slowly or incrementally over longer periods of time. Do you find that working with longer durations is necessary for achieving the effects you're after?

MP: Usually the longer durations grow organically out of the initial decisions about the material itself, so I'd say yes, that's often the case. Of course the durations are not exclusively long. I often find myself asking if there's a way of making things more compact. Most of the harmony series pieces fit that category. Nowadays I try only to think about duration in the most practical terms. It becomes less and less a conscious variable, and in and of itself is (for me, now) far less important.

LS: In your essay Hit or Miss, you discuss the convoluted history of ideas that have shaped modern music, noting that an untrained listener will find it difficult to follow the why's and how's of the music.

You respond, "I work toward another goal: to seek to make a musical object which exists in as direct a relationship to a listener as possible. Anyone should, through careful listening, be able to understand what is happening in one of my pieces. Like most of the others associated with experimental music, I attempt to strip away as much of the obvious formal complexity from a work as possible: the work is direct and simple."

What does it mean for an audience to understand your music and be in a direct relationship with it? Can you give an example of the kinds of ideas you hope to communicate? 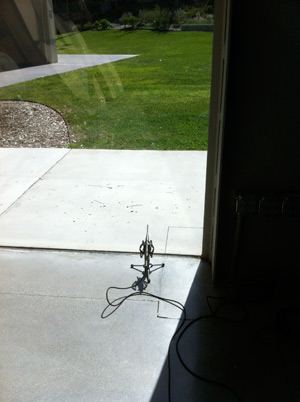 MP: I think, first and foremost, that it means to be immersed in the sound world of a piece. Sound comes towards us; we go towards it. The relationship that produces this immersion is the activity from both sides. It's my belief that "understanding" in this way is pretty much the same thing as listening carefully. I doubt that it is really a form of communication (that is why I like the word relationship).

LS: When I listen to 2 Seconds/B Minor/Wave or Asleep, Street, Pi