Chris Carter and Cosey Fanni Tutti should require no introduction to Brainwashed's readers. Members of Throbbing Gristle, purveyors of fine electronic music under the names Chris & Cosey, CTI, and Carter Tutti and dedicated solo artists; there is not much out there that they have not had a stab at. John Kealy asked them about the recent Throbbing Gristle reissues, their current projects and the changing state of acceptability in art.

John Kealy (JK): How does it feel to see the classic albums back on Industrial Records especially considering the events of last year (Genesis leaving TG, Sleazy passing)? Are these the definitive versions of the albums?

Cosey Fanni Tutti (CFT): It feels so good to have them finally released on Industrial Records. It was already in the pipeline anyway. All four of us had decided to do this prior to Gen's walking out and the great loss of Sleazy. I guess you could say these are the definitive versions now as Chris took such care with them, keeping them as true to the original recordings as possible.


JK: Have you heard from Gen since the last termination of TG? Has he had any input on the new TG reissues?

CFT: We haven't heard from Gen for nearly a year now which also answers your second question. Chris and myself did all the work for the reissues. 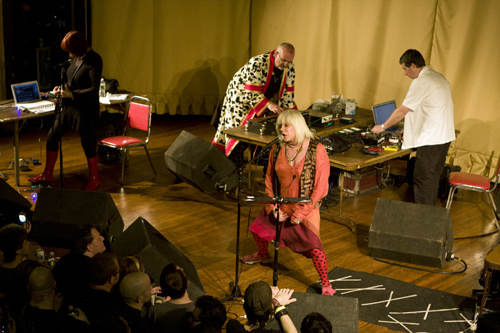 JK: Is there anything else left in the archives from TG's first incarnation? I was surprised that there were so few alternative studio takes on the current batch of reissues.

CFT: We got asked this question before. Obviously there are jam sessions on cassette but these would take a lot of work and digging out. There are unreleased TG recordings from the regrouping as well so there's a lot of material.

JK: Will you be reissuing other TG albums like TG CD1, Journey Through a Body or In the Shadow of the Sun?

CFT: We haven't thought about any other reissues yet because we have to finish Sleazy's inspired last TG project, Desertshore. So that album will get priority and the next 4-6 months of our time. After that we'll think about other TG releases.

JK: Are you surprised by the continued interest in TG?

CFT: I'm both surprised and accepting of it. But also there is a generation¬†who have discovered TG for the first time and the fact¬†that TG speaks to them really excites me.

JK: I was born far too late to experience TG the first time around, I discovered "Hamburger Lady" on Napster about 10 years ago and was hooked from there. However, I am aware that I was listening to TG through the ears of someone living in a completely different world (a teenager during the boom years in Ireland meant I had very little to be upset about). Add to the fact that things like Tesco (that was a grotty supermarket in the '70s and is a monstrous corporation today) or pornography are viewed differently now. Do you think these early TG recordings can have the same impact on modern audiences as you did on audiences in the '70s/'80s? Do the specific cultural references of TG mean as much as the overall message of doing as you think, not as you are told?

CFT: Well I've heard from many people new to TG that it does have a similar effect on them as it did in the '70s. Maybe that's for slightly different reasons.¬†Although the present political climate is similar the '70s there's been a lot of water under the bridge since then and society and culture would obviously not be the same as back then. However, the basic premise remains the same but for differing reasons in terms of being spoon-fed notions of identity. Now it's via the Internet and insidious means like smart phones‚Äîso "do as you think, not as you're told" still has resonance so long as people have retained a bit of free spirit/will during the consumerist onslaught of the past 30 years.

Christ Carter (CC): I've probably listened to these tracks as much as any hard-core TG fan, what with mastering the originals, mastering TG24 (both versions), all the remastering and 30 years of seemingly endless test pressings and I think they hold up really well. But I would say that wouldn't I? Of course they've become these historically relevant music artifacts, highlighting the birth of the Industrial genre and so on but that apart they also stand the test of time, in fact I think they are somewhat timeless. Some of the direct cultural references of the time may have changed but the politics are still very relevant and¬†I think¬†the¬†overall TG sound from then is pretty difficult to date.

JK: Did the reformed TG set out with the same goals as the original TG or did you feel things were different when you got back together?

CFT: Regrouping was like riding a bike‚Äîit was like muscle memory once we started playing together. Overall I think¬†we had continued with the same attitude to life and creativity so coming together again wasn't different in that respect. Of course we didn't need to break down preconceptions because we'd already done that. There were different hurdles to tackle. I wanted us to do something new together‚Äîotherwise what's the point of regrouping.

CC: I agree with Cosey. But I also remember telling Cosey and Sleazy back in 2000 or 2001, after Daniel (Miller) again broached the subject of TG reforming, that I'd only do it if we confounded peoples expectations of what they thought TG would do a second time around. I think if it had just been up to just the three of us the outcome, the development of the regrouped TG, could have been quite different. More akin to what we performed at Tate Modern and the Donau Festival or at the Statens Museum.¬†As it happened there was a LOT of pressure on us to 'play the old songs', which we three were always resistant to do. Well actually Gen was also reluctant initially but¬†he found the improv side difficult as a way of contributing anything meaningful to what we were playing. He was definitely better at performing the old TG material. But he seemed to have changed his mind on what he liked or didn't like playing each time we went on the road or into a studio. Which is par for the course with Gen. 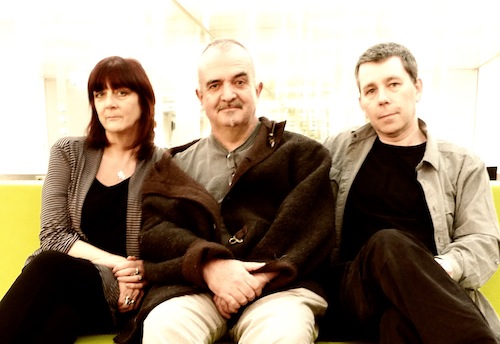 JK: Was what became X-TG more what you had in mind at the beginning of
the TG reunion? Based on the bootleg live recording, you certainly moved
quickly away from playing the hits. Did you have any plans for X-TG or
was it mainly a way to fulfil the live obligations that were already
booked?

CFT: For me personally yes. If we were going to regroup I wanted to do something new with TG. Sleazy, Chris and myself spent a lot of time in our studio working on ideas and new TG material but Gen wasn't up to it. The more experimental it was the better it felt for us. But Gen didn't embrace that and was short on ideas or how to contribute to that kind of material. And unlike the three of us he didn't invest in any new equipment for TG. It was very frustrating for us. That's why when we did 'A-P-P-A-R-I-T-I-O-N' and other kinds

Angels of Light and Devendra Banhart