Robert Haigh's 30 year long musical career has spawned an impressive and uncommonly diverse catalog of sounds. He has released records under his own name, as Truth Club, Sema, Fote, and as Omni Trio, collaborated with Nurse with Wound, and recorded multiple drum 'n' bass club anthems, some of which were inspired by Philip Glass. His work has been released by labels such as United Dairies, L.A.Y.L.A.H., Crouton, and Dom, and his music has even appeared in video games like Grand Theft Auto 3 and Midnight Club 3. He is currently completing a trilogy of solo piano records for Siren, of which Anonymous Lights is the most recent. Robert recently took the time to talk to Brainwashed about his past work, improvisation, collaborations with Nurse with Wound and Hafler Trio, the role of silence in music, and much more.

Lucas Schleicher: Who are you, where are you from, and how would you describe what you do?

Robert Haigh: My name is Robert Haigh. I was born in Yorkshire, England and I lived in London for many years. I now live in Cornwall.

Simply put, I create music. But in a way (and at the risk of sounding cheesy) it's truer to say that I uncover music. Everything comes out of a degree of improvisation.

LS: Are you currently working on any non-musical projects?

RH: I don't really have the time at the moment.

LS: When did you begin writing music? What was your first release and who released it?

RH: As a teenager in the mid '70s I was is a rock group in South Yorkshire. I wrote songs, played guitar, and even sang!! We also did covers of Bowie and the Velvet Underground. My first release was as Truth Club on the Hoisting the Black Flag comp released by United Dairies.

LS: How did you meet Steven Stapleton and become associated with United Dairies?

RH: In the early '80s I worked with Trevor Reidy (Truth Club/Fote/Monochrome Set) at Virgin Records in a basement off Oxford Street in London. It was a bit of a gathering place for post-punk/experimental musicians. Steve worked just down the road in a little artist's studio and he used to hang out at the shop.

When the manager was out we would play all of Chance Meeting over the shop's sound system and drive all the customers out. Steve was interested in what we were doing and asked us (Truth Club) to contribute a track for Hoisting the Black Flag.

LS: Who else showed up in that Virgin Records basement? Did any other notable projects emerge from there?

RH: Jim Thirlwell (Foetus) worked at the shop for a while. He hooked up with Steve, too. Just about anyone doing interesting stuff in London passed through that basement at some point. And a few Australians too.

LS: Tell me a little more about Truth Club. How long did it last and who was involved (besides Trevor Reidy)?

RH: Initially it was just me and Trevor, but later we invited a few others to help out. Deborah Harding did vocals and clarinet, Trefor Goronwy (later of This Heat) played bass. We stayed together for about a year and a half. We supported a few bands around London, including Cabaret Voltaire, Clock DVA, This Heat, and The Associates.

LS: And how did your Sema project begin? Who was involved with that and what was the impetus behind it? What about Fote?

RH: Sema was just me. I wanted do do something more atmospheric, more layered and textured, without the constraints of a group format.

Fote was the Truth Club without Trefor Goronwy. We made two EPs.

LS: What was it about tape collage and atmospheric sounds that appealed to you? How were you drawn away from rock 'n' roll?

RH: The album that introduced me, and turned me on to an alternative way of hearing music, was The Faust Tapes. In an attempt to promote the group, Virgin put the album out at 50 pence and my sister (who's a few years older than me) went out and bought a copy.

She hated it and gave it to me. I wasn't so sure at first (I was about 14 at the time), but I only had a couple of albums in my collection so I persevered with it. After a while I found it compelling. It opened up a whole new way of hearing and thinking about music. I was especially drawn to the juxtapositions (discordant sounds alongside melodic, etc.).

LS: Are there any plans to re-release your early records? If not, why not?

RH: Unfortunately all the master tapes for those releases are lost. 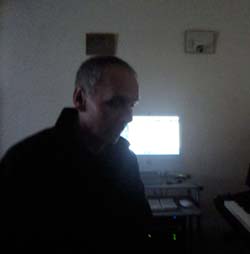 LS: In 1986 you released an album on United Dairies called Valentine Out of Season, which shares its title with a composition by John Cage from 1944. Beyond being works for solo piano, what's the connection between them, if any?

RH: No connection apart from being a big fan. I liked the title and being a bit lazy, I 'borrowed' it. I think that it may have also had something to do with the fact that my previous album was called Three Seasons Only.

LS: Some of the early records you released under your own name had a "classical" flavor to them and you've returned to that style in the last few years. Were you trained in classical performance, or did you go to school for it?

LS: But in the 19 years between A Waltz in Plain C and Written on Water you released a lot of electronic music under a few different aliases. What precipitated your move away from the piano and toward the drum 'n' bass sounds of Omni Trio and London Steppers?

RH: I never really moved away from the piano. All the riffs, melodies and arrangements were done at the piano and keyboard. Some of the tracks started life as extended layered piano workouts. The original sketch for "Renegade Snares" sounded a bit like Philip Glass.

You have to bear in mind that there was no such thing as drum 'n' bass at this point, just a load of producers playing around with keyboards, samplers and sequencers. It was very exiting and very fresh.

LS: Was PM Recordings (Parliament Music) connected to all that? Was it a label or a shop?

RH: In the '90s I ran a record shop in Parliament Square in Hertford. We started a label to release music by a bunch of talented producers that frequented the shop.

LS: What do you think about current beat-driven electronic music like Burial or Four Tet? Is there anything out there now that you feel is as fresh and as exciting as the music from the early and mid '90s?

RH: I'm not really following that sort of stuff at the moment. I occasionally get to hear some dubstep which can sound quite experimental.

LS: Omni Trio was an especially popular, succesful, and influential project (The Deepest Cut is counted among the earliest jungle records). Why did you end it?

RH: After Even Angels Cast Shadow and especially the minimal structures of Rogue Satellite, I felt that perhaps my work was done in this particular area.

Meanwhile I had been sifting through the piano and counterpoint pieces that I'd been composing alongside the Omni Trio stuff. There was a strong compulsion to just throw myself into developing this material.

All along the intention was to do the Omni Trio stuff alongside producing and releasing piano based material under my own name. Then the Omni thing blew up much bigger than I had anticipated. But throughout the '90s I also kept writing piano and minimal themes. By the early 2000s the time seemed right to put the emphasis on developing this material.

LS: How do you feel about the inclusion of Omni Trio songs in video games like Grand Theft Auto? How did that happen?

RH: That's down to my publisher. I'm very happy with it. My son loves those games.

LS: Do you think there's a connection between your current work and what you were doing earlier in your career?

RH: I suppose the thread that runs through everything (from my '80s and '90s stuff to the present) is a love for the minimal or the economic use of sound materials. I like to make the most of limited elements, be that instruments, musical phrases, repetition, gradual development, or whatever else.

LS: Your return to the piano was Written on Water, which starts with a very metered, very