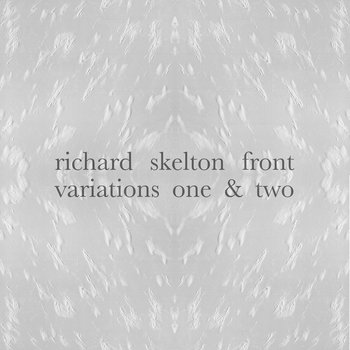 Music for the retreating ice-sheets of Iceland, produced in Seyðisfjörður, Eastern Iceland, in 2016.

Front Variations is composed from sine waves subjected to increasing amounts of feedback in order to simulate the so-called 'ice-albedo' feedback mechanism.

This is the process whereby the action of melting glaciers reduces the global surface area of ice, thereby reducing the amount of solar radiation that glaciers reflect, which in turn increases global temperatures and causes further glacial melting.

Ring modulation and distortion were also used to further deteriorate the sound signal.

A Great Body Rising and Falling and Another Hand (January 2019)

Both represent different variants in the development of what Peter Meanwell described in The Wire as 'land music,' an endeavor informed by archaeology, ecology, folklore and myth. The first, A Great Body Rising and Falling, explores the idea of agency and sentience within the apparently inanimate, and the second, Another Hand, takes as its inspiration a line from a gloss on Sir Gawain and the Green Knight to explore the relationship between the natural and the supernatural.

Primitive And Deadly is EARTH's tenth studio collection.  Dylan Carlson and long term cohort, drummer Adrienne Davies, manage to pull off the trick of completing an Ouroborean creative cycle, twenty-five years in the making, whilst exploring new directions in their music.  For the first time in their diverse second act, they allow themselves to be a rock band, freed of adornment and embellishment.  As much as Carlson's guitar has always been the focal point of EARTH's music, it's been surrounded by consistently diverse instrumentation. Here the dialog between Carlson and Davies' drumming remains pivotal, underpinned by the sympathetic bass of Bill Herzog (Sunn O))), Joel RL Phelps, Jesse Sykes and the Sweet Hereafter) and thickened by additional layers of guitar from Brett Netson (Built To Spill, Caustic Resin) and Jodie Cox (Narrows).  Perhaps the largest left turn on Primitive And Deadly, though, is prominence of guest vocalists Mark Lanegan and Rabia Shaheen Qazi (Rose Windows) who transform the traditionally free-ranging meditations of EARTH into something approaching traditional pop structures.